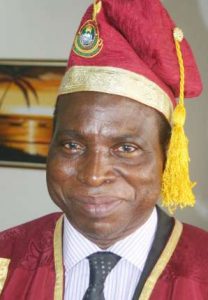 “This is my last convocation ceremony as the Vice Chancellor of this University” he said. “My tenure, which began on the 12th of November 2012 will end on the 11th of November this year.”

So far, the administration of Professor Bello has seen the restoration and subsequent dissolution of student unionism in the University.

On the brighter side, it has seen the record breaking feat of students attaining the 5.0 cgpa both last year and this year, and the graduation of the highest number of graduates from Unilag so far, about 12,617. The Vice Chancellor ensured that all the graduating students received their certificates on their convocation day, unlike in earlier times.

The Vice Chancellor has barely ten months to go, before his five year tenure finally comes to an end.