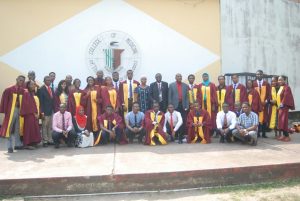 After the inauguration and swearing-in of the newly elected executives and senate members of the Association of Medical Students, University of Lagos (AMSUL) on the 3rd of March, 2017 at the Faculty of clinical science by the Dean and student affairs Officers, they swung into action and delivered their first activity for the year – Freshers consult.

Freshers consult is an annual program structured to bring together all MBBS 200L students just resuming into the college of medicine; to welcome them, relate with them, introduce them to people and things before them, enlighten and expose them to all the possibilities, avenues, activities, organisation available in the college and beyond and even many more. The expectation of this year’s Freshers Consult was not cut short – as a program under the office of the AMSUL’s social secretary in collaboration with other executives – in bringing to the table, all that could concern the medical student in his/her environment, as it held on Wednesday, 8th of March, 2017 at the BioMedical Hall.

This year, to speak on combining Academics with politics was Ibe Festus, 400L student – the best student in his class, 2-time senator for his class, former AMSUL Senate Chief Whip and present AMSUL Senate President. Speaking on entrepreneur was Kachi Anyaogu (CEO Knight Bags) and Nerrisa Nkwuoke (CEO/Distributor Sack Insecticide) both in 300L. Still on combining Academics well with other activities; Hassan Eniola (500L student) spoke on quiz club – as he is the present coordinator of AMSULs Quiz club and have been representing and winning for the Association at various school quiz, states and levels – while Ibrahim Balogun (600L) spoke on tutorials (the academic and business aspect), as he is one of the coordinator and tutor for AMSUL tutorials.

Speaking on “sport” was Hassan Azeez aka Zizou Zanti (500l), as he was the former COMPSSA Sport secretary and a vibrant award-winning AMSUL Sport person and one of the championing team representing the association, even at the National level – NiMSA Games. On combining academics with “Debate” and speaking on possible opportunities and privileges was Minka Ndifon (500l), winner of COMPSSA debate 2014, winner of UNILAG debate 2016 and present Coordinator of AMSUL Debate club.