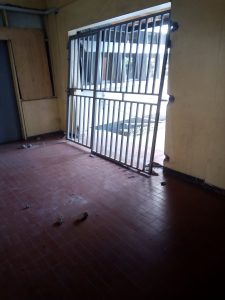 On Friday last week, news got around that one of the gates to the building in the college that houses the DSA Offices, pharmacy class, TBS complex and so many other laboratories and offices was pulled down. It did not only go down, but was caused by the children playing around it, tugging at it and finally, the gate gave way.

Some of the children were injured in the course of the gate falling off it walls, and were immediately taken to seek medical attention at the clinic – being staff children. Also security showed up there as soon as possible to ensure safety, proper documentation of event and non-occurrence of such event again. As they stated that, staff children should remain in their parents’ offices after school hours and no longer roam about in the college, for their safety.

The gate still stands, leaning on the wall as of today (with no repair been heard of), awaiting any tug or pull to fall over anyone and injure the instigator, passers-by or anyone standing –by.