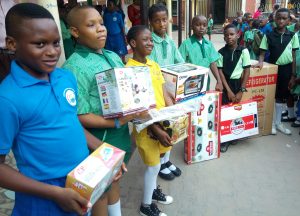 The University of Lagos Staff School on Saturday, won the Hanson Mathematics Competition for the 4th time in a row.

Having won hosting rights on the strength of their previous performance, the school hosted and produced the first top seven performers for the first time in the history of the competition, with Ifeanyi Anyagwa leading the pack in first position.

Similarly, the school had won the Nigerian Tulip International Colleges and National Mathematical Centre annual mathematics competition for primary pupils earlier this month, beating other contestants to the prize.

Speaking on the reason behind the school’s success over the years, the Headmistress, Mrs. Nkemjika Uzoaga, revealed that the school had always paraded teachers who are not only sound, but also dedicated.

She said that the school, despite shortage of resources and adequate infrastructure, had always done better than its sister school, the University of Lagos Women Society School who has everything.

She said: “We don’t have air conditioners in our class, in fact, if you go to our classrooms, you’d think staff school is a public school.

“But because it’s a university school, it’s a prestigious thing to bear that name. And if we all claim and agree that university of Lagos is a university of first choice and nation’s pride, a school that you name after it should also fit into the same description”.

The Headmistress however, lauded the effort of the University management for doing their best in terms of retaining staff and prompt payment of salaries as at when due.

Meanwhile, the mathematics teacher of the winners, Mr. Odubiyi Solomon, who has been teaching in the school for the past ten years, has attributed the success to hard work, determination and perseverance.

He said pupils hoping to tow the footsteps of Ifeanyi should endeavour to always do their assignments in good time, work on their own and be independent.

“I believe in the independency of the children, not waiting for teachers to teach them everything but to research…quite a number of them (the winners) have been doing it, and they have been very consistent”, he said.