Nigeria has since independence experienced different setbacks and challenges as a result of the actions and inaction of the people and the government; both in the military and democratic regimes. These setbacks have threatened our national unity and progress, and our future as a nation. The height of it was the Civil War. However, although the civil war had disastrous effects on our national development, it is nothing compared to the enormous threat which corruption is posing to the development, and future of our country.

As the days go by, we wake up to various unsettling news of the wrecking of our country by those into whose hands we have entrusted the running of her affairs. It is becoming evident that the people we gave the mandate to represent us in the law-making chambers have turned against us, and are now using our mandate to rob us blind, slowly destroying our social attitudes. They have congregated themselves into cabals who are swimming in pools of corruption, using the power of the chambers to protect their obnoxious, unscrupulous deeds.

They have made themselves sacrosanct, untouchable, and immune to criticisms or questioning. If you are not for them or with them, if you do not believe in their ideology of glib theft and manipulation of public resources for private gain, if you don’t belong to their circle of cannibals preying on the people whose interests they swore to protect, you would rather choose to keep silent or risk being silenced. They have ridiculed our sanity and moral state as a society and have trampled our laws into the dust with impunity. They have turned the hallowed chambers into a parlor of mockery and imprudent talk, where one can tell the other, “I will impregnate you”.

They use the chambers to fulfill their lust for money and power, building a culture of corruption, and tearing down the legacy of our great founding fathers before our eyes. The situation has gotten so rotten that one of them called for the legalization of corruption. This call was not made during beer-parlour chitchat or during a careless banter with colleagues at a meet-and-greet, in which cases we could surmise that the senator was either drunk or jesting. This man had the brazen, bald-faced effrontery to make this call on the floor of the house, while debate on our budget was ongoing. To him, that is the only way the budget can have impact!  The incident was even tweeted on their official twitter page; a show of how callous these people can be, and to what great extent they can disregard the people who gave them their mandate.

That sordid act of calling for the legalization of corruption, which ought to have thrown this individual into a well of shame, propel the people that voted him to work on his recall, and caused widespread outrage, was met with indifference. It was seen as just another matter that causes no reaction whatsoever, and where it does, it is that of a thumbs-up from his colleagues who would have made the same call but just do not have the effrontery. The man is still sitting comfortably in the chamber, cool and unthreatened. Why? The answer is simple; he is part of the cabal camp controlling the chamber. Corruption is a norm and for them, calling on the legalization of corruption is a step forward for their collective ideology. 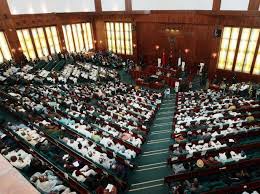 The captain of their ship facing them on the upper seat remains unperturbed, presiding over the formulation of laws that he has over time trampled into the mud and counted of no effect, making laws he has no respect for. He is there facing his own trial, and using his chamber power to frustrate those who he perceives will not compromise in bringing him to justice, and rusticating those who call for his investigation. With his antecedent, one wonders about his perception of the rule of law, of corruption, and his real intentions for the future of our country. The man with the certificate scandal is still there, walking unflustered with his shoulders high, without any iota of remorse. On the contrary, he is upgrading his popularity, venturing into the entertainment industry with music videos, complete with some children effects, to make sure no one is left behind. Or have you not seen his video? “#AJEKUIYANIOJE”

They have continued to rule high on our silence, questioning our power as a people by clamping down on those who speak against their corrupt practices and exalting those of their cabals who speak for their corrupt practices. A man rose up in a chamber to reveal an illegal and corrupt practice that was called “padding” and he ended up being suspended for 180 legislative days, and everything seems okay, nothing happened. Another man in the upper chamber rose up at a time to call for investigations of some accusations against the captain of the ship and one other member of his cabal as regards importation of a car and custom duties, and the next thing we heard was suspension of  six months, and again nothing happened. Those that called for the illegal sharing of our money are there enjoying our money, while those exposing the crime are the ones being treated as criminals.

I do not know what we can call or what best to describe this people ruling us in our chambers, however, I know of a quote that says: When exposing a crime is treated as committing a crime, you are being ruled by criminals.