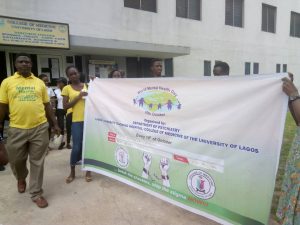 In the College of Medicine, University of Lagos on Wednesday, 8th of November, 2017 was the “One1 More Dayyy Campaign” organised by the College, for her staffs and especially – students in conjunction with the Lagos University Teaching Hospital (LUTH), UNILAG Counselling Unit, CMUL Counselling Unit (Resident in the Department of Psychiatry, CMUL/LUTH)  and Suicide Research & Preventing Initiative (SURPIN).

The campaign was a procession of college staffs, LUTH staffs and students (COMPSSA) which moved round the school compound and from one hostel to another, creating awareness about suicide and depression – which is now on the rise among students both in Akoka and Idiaraba campus.

This reason backed up with statistics and facts, pre-empted the Dean of Student Affairs UNILAG to bring SURPIN to speak to the students on these issues – involving the counselling unit – sometime in September 2017, which coincided with the hall weeks in various residential halls in Akoka, after which the Provost, College of Medicine also brought the team and idea down to Idi-Araba, as students in the college face more pressure.

Listening to the awareness speech made in the female hostel (OPH – CMUL) by one of the Coordinator of the campaign, a consultant Psychiatrist in CMUL/LUTH – Dr O. A. Adepoju – he spoke extensively on the symptoms and signs of depression which included low mood, loss of interest, loss of energy, appetite/sleep changes and unexplained physical complaint like crawling sensation and internal heat.

He further explained that predisposition to depression as well as suicide including bereavement, traumatic events, chronic stress, substance abuse, loss of loved ones among many others, looking out for warning signs amidst ourselves, which are changes in behaviour, social isolation, talks of death and suicide more than often and so on.

He also made mention that all counselling units (in Akoka and Idiaraba) are opened to all student to discuss any issues – no matter the type; academics, work, family, financial, health, relationship – given them tough time, bearing in mind that, we are all adults and have different challenges in life but we shouldn’t keep our problems to ourselves but share it and also be our brothers keepers. Also he encouraged us all to jointly kick against suicidal and depression stigmatization.