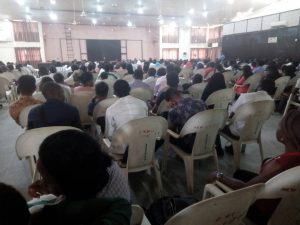 At the maiden parliamentary summit organized by The House of Lords of the College of Medicine and Pharmaceutical Sciences Students Association (HOL COMPSSA) on the 15th of October 2017 at the New great hall, CMUL – which was themed, “The Youth And The Legislature; Power house of the Nation – the representative of the chairman of the occasion – Otunba Kayode Pius – in his speech made it clear that, “youths should no longer be seen as leaders of tomorrow but of today because the time to act is now not tomorrow”.

He furthermore explained that, “youths have allowed themselves to be distracted by “big brother”, “football” and other various forms of entertainment, leaving the decisions and development of the nation and themselves at the mercy of the “old and senile generation” who are not ready to forgo power, hence reflecting in the quality and outcome of leadership in Nigeria today”. Also, he advised that Legislators should no longer be employed on full time basis but as part time staff, so that utilization and productivity is maximized.
Prof. F. E. A. Lesi – the Provost, College of Medicine, University of Lagos – in his opening speech stated that the title,  “Youths and the legislature; power houses of the nation” was very apt and timely. He also went on to add that programs like these pave ways for the youths to develop a sense of pride, confidence and creativity in the heritage of Nigeria; thereby enjoining students to engage themselves quite early in politics and to always be active in the political activities around them, because If we – as intellectuals – don’t participate in the political process, “touts” will take over but if we learn properly and do things right, our future as Nigeria will be brighter.

Prof. Ogunsola – DVC (DS), UNILAG – at the summit also highlighted the important roles of women in politics; outlining issues and challenges women face in development and politics. These include Fear of the unknown, Self stigmatization, Education gap and violence. She however advised women  to work on themselves, start to build networks, get mentorship, be assertive and not play stereotypes.

Many political oriented and active youth leaders from the Lagos state house of Representatives and different faculties in the University were present. One of which was Senator Ibrahim owolabi -Majority Leader, Lagos state youth parliamentary – who spoke on the “Not too young to run bill – Are the Nigerian youths ready?” And in conclusion, encouraged us to fully be a part of the political change around us by joining a political party and joining the campaign. Senator Aminu Lukman (National Youth Parliamentary), Senator Hazeezat Adeola (Deputy chief whip, Lagos State Parliamentary) and Honorable Madueke Ebuka (Speaker, Faculty of Science, UNILAG) spoke on politics and the Nigerian health budget – our lapses and way forward. Also “Biafra and the Nigeria state; Separation or compromise?” was debated on by different speakers and senate president of faculties and students associations.

Speaking with Lord Akinola Ikeoluwa – The Chairperson, planning committee of the parliamentary summit and Deputy registrar, HOL COMPSSA – she expressed her happiness at the execution of this program by the House of Lords (Legislative arm of COMPSSA) which was aimed at raising awareness and increasing the participation of students and youths in both the university’s and National politics particularly the legislative arm. In total about 195 young people were in attendance at the summit, which was an encouraging turnout to start with.