Today, the 6th of February marks the International Day of Zero Tolerance to Female Genital Mutilation. This is done annually all over the world; where different organizations – both governmental and nongovernmental – come today to raise awareness and active participate to put a stop to FGM (a setback in our generation, majorly as Africans).
Female Genital Mutilation (FGM) also known as “Female Circumcision” of the genital part is the “ritual” cutting or removal of the external genitalia (which can be partial or total) for non – medical reasons which include different part of the female reproductive organ – vagina – such as the Labia minora, Labia majora and, or clitoris.
People at risk – the most – are young girls between infancy (from birth) and adolescence period. Statistics carried out in 2016 showed that 200 million girls are been exposed to FGM.
Why is this barbaric act being carried out?
Research has shown that FGM is carried out as a result of different sociocultural and even religious beliefs about the female child, surrounding her sexuality. Some of these beliefs include;
1. It’s a social norm to make the girl child and her family accepted into the community.
2. Prevents Sexual Infidelity and promiscuity.
3. It reduces Libido, amongst many other myths.
There are lot of disadvantages and complications of FGM which include:
i. Physiological Problems and trauma that mars the girl child all through her life time such as depression, anxiety, low self- esteem, phobias.
ii. Infections of the genitourinary tract, other blood contact infections and exposure to HIV/AIDS from the horrible hygiene, instruments and blades used to cut – usually a communal blade.
iii. Severe Pain from the act, which is done without anesthesia and mercy.
iv. Excessive bleeding from the genitalia organs and important vessels being cut into, this is life threatening and can eventually lead to death.
v. Injury to surrounding tissues like the vaginal atrophy.
vi. Sexual problems like pain during sex, this is from the scar healing of the wounds caused by the cut.
vii. Subfertility from an abnormal anatomy of the reproductive tract which is caused by FGM.
This act is also a violation to the human rights of females and constitute a significant part of Gender based violence (GBV), also known as Violence Against Women (VAW); One of the numerous things being fought against to achieve gender parity. 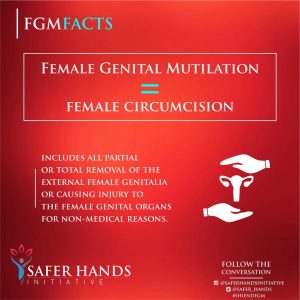 How do we put a stop to FGM?
1. We all should be a child health right advocate, a girl child advocate – at all levels and on all platforms.
2. We should endeavor to educate our folks and help stand up against FGM for these poor girls that are voiceless.
3. Medicalization of FGM should be stopped.
4. Culture, tradition and the likes fueling or encouraging FGM should be abolished. Remember, culture is dynamic and is learnt and can be unlearnt.
5. We should educate the younger generation (boys and girls) to know what is “right” and “wrong”, so they have behavioral modification from now and we can invariably secure a better future.
Together we can, let’s put a stop to FGM…. A healthy population is a healthy nation!