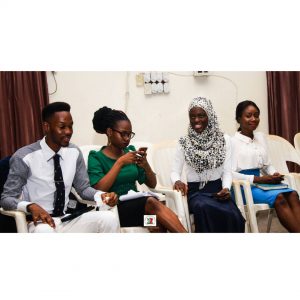 The 6th of February, 2018 would always be etched in my memory for as long as it doesn’t wear out. That Tuesday evening, the esteemed Association of Medical Students University of Lagos at College of Medicine, UNILAG were given an opportunity to listen to the aspirants of different executive positions and decide who they would cast their votes for.

The session was to have begun by 5:30pm but was set for 6:30pm to accommodate any time delay by aspirants and the AMSULites. Unfortunately, all aspirants were still not seated by 6:30pm. This didn’t go down well with the Electoral committee and a host of other students who found it a show of indiscipline.

By some minutes past 7pm, the program began. The hosts were very interactive and ensured the aspirants were less tensed-I mean who wouldn’t be when you’re about to lay your plans before others and solicit their trust in your ability?. The hall was already being filled with people, united to seek the best of their association and put those they believed in as their executives. The Panelists were very prepared to drill the aspirants in every ramification.

Finally, after the Nigerian anthem and opening remark, the official business of the day commenced. The first aspirants to talk were vying for the post of Sports Secretary. After their speech, they were asked questions by the audience and finally by the Panellists. Once their session was over, the next aspirant was called to the stage.

The office of the Public Relations Officer was unopposed so we were all eager to listen to his plans. The highlight of his session was when an AMSULite asked how he would announce an event and he did it hitch-free! He got his fair dose of questions as well.

Next up was the aspirant of the post of Treasurer. The young man gave details of his duties as treasurer and plans of how he would carry them out. The panellists asked more questions before he was finally allowed to return to his seat.

The Social secretary aspirants came up next. The quietness in the hall would give you the chance to bear a bug’s wings flutter. Smiles! But before then, the crowd went wild with cheers when one of the aspirants was called forth, it was a sight to behold. The two young men gave their best while presenting and answered their questions accordingly.

The Assistant General Secretary aspirants were called next. Unlike the other positions contested for by the same sex (male-male or female-female)- this post had a male and female contesting for it. The male aspirant brought a twist to the slide format by using mostly pictures to convene his plans. Afterwards, the lady came with a resounding voice to convene her own plans. Their session had us all up and impressed and we just knew it would be tough deciding who would win as they both spoke well. They were asked questions by the panellists and audience and you could see the tension eased off as they got back to their seats.

Then came the General Secretary aspirant. He was also unopposed and interestingly had been on the executive council of the previous tenure. This shows one that service isn’t a one-time thing! After his brief and concise manifesto, he got his questions and answered them to the best of his ability.

The post of the financial secretary was unopposed as well and the male aspirant calmly spoke about his plans for the finances of our association. He also won the hearts of the people once he answered questions on book keeping and finance records. After he was done answering questions, the tension in the hall seemed to rise again.  The aspirants for the final opposed post were about to be called on stage. Their presentations were detailed and engaging and within their time frame. By the time they were done with their manifesto for the post of Welfare Secretary, the questions began to reel in. The Panellists also gave them a lot of questions, suggestions and advice.

Then a twist in events happened-the aspirants for the position of president and vice president were not allowed to give their manifesto due to their late arrival for the program. With a lot of rebuke and displeasure of the panellists and electoral committee, the final judgement to them was having 85% of the total votes of the election before they could serve in their respective offices. After they tendered their apology to AMSULites, the event came to a remarkable ending at about 12am.

The aspirants had done their best, campaigning and delivering their manifesto. It was the turn of the students to decide with their votes and elect the executive council that would serve them for a year!