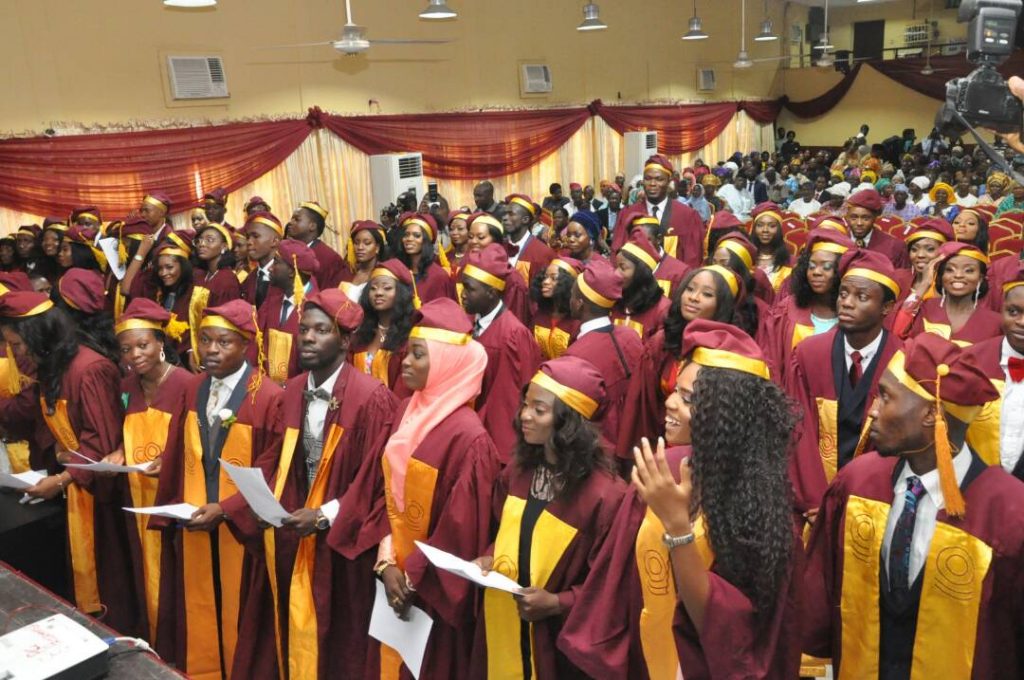 On Thursday, 15th of February 2018, the department of Physiotherapy (CMUL) induction and award ceremony for the graduating class of 2017 took place at the Old Great Hall, College of Medicine, University of Lagos, Idi-araba – amidst the postponement of the university’s convocation ceremonies.

The program was anchored by Dr U. A. C Okafor, a lecturer in the department, and the total number of inductees was 75. Between 12pm to 1:10 pm, guests and inductees were seated in the hall before the program started with the academic procession led by the management team and staffs of CMUL  at about 1:18pm. The National anthem was taken after the procession by the MC, after which he introduced the members of the management team to the guests – which include the Provost, Deputy Provost, College Secretary, DSA, HOD physiotherapy Department, among others.

The College Secretary – Barrister Oladejo Azeez Esq – welcomed everyone who came for the program, thanking them for their presence. Then, the Provost was called to stage for his welcome address; while addressing the inductees, he also congratulated parents and teachers for making today a big success through their sacrifices, money, time. In his address, He told the inductees to “dream big, act with courage and should not chase after money right now but use what they had learnt to build competence and excellence and money will follow them”. He went on to encourage them to “make a choice in everything they do, be a good ambassador of the College of Medicine, make integrity their watchword and should make a difference in this world”. 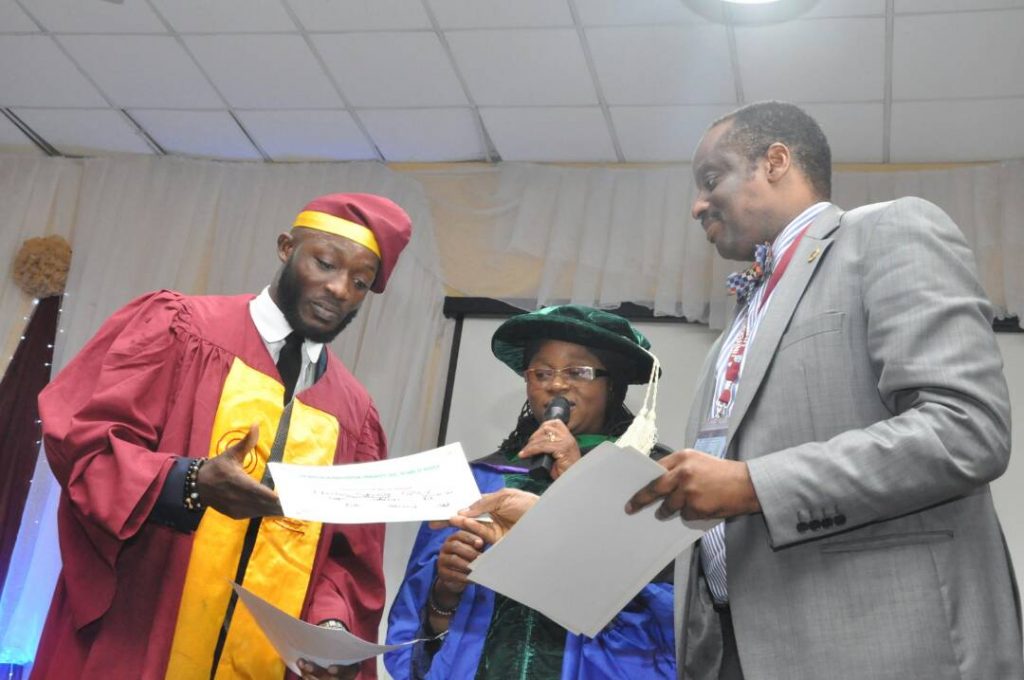 After the Provost’s speech, a citation was done by Dr A.I. Aiyegbusi for the induction Guest Lecturer – Mr O.A.C. Odunuga, FNSP (Fellow of Nigeria Sport Physiotherapy) pioneer, sports physiotherapist to the national sport commission, an alumnus of this great college who finished from the department of physiotherapy   B.Sc(Hons) in 1979. The guest speaker came on board and he told the inductees that they didn’t make any mistake in choosing physiotherapy as their course of study. He continued by giving “6 points on how to be  a successful physiotherapist”, which are; Interest, Mentorship, Availability, Take pride in what they do as they are not second class citizens but first class citizens, Operate and read regularly. He also told them they have no right to insult anyone when faced with challenges at their work place.

After the induction lecture, the program proceeded into oath taking and presentation of certificates done by the Registrar and CEO, Medical Rehabilitation Therapists Board of Nigeria in person of Mrs O. T. Akanle alongside the HOD of physiotherapy at 2:38 pm where some of the inductees were been awarded with certificates for the Medical Rehabilitation Therapy exam they took on the 14th of February, 2018.

The Inductee who emerged as the best was Obey, Ibrahim Adewale while Odunsi, Fatimat Abiodun, Jayeoba Oluwafaanubomi Ewa and Adodo Rachel Ilojegbe emerged as 1st, 2nd and 3rd runners up respectively. After this, the CMUL Alumni Chairman – Dr Jibola Adeyeye (senior special adviser to Ondo state ministry of health) – encouraged the inductees not to forget the college, he stated the goods works done by the alumni and gave a hint that Dentistry accreditation will soon be restored back as the alumni are working on it.

The Recognition of Excellence and presentation of Awards came up next and was done to recognize those students that toiled with their sweat right from Akoka up until final year; praising them and crowning their efforts with awards which was coordinated by the Assistant HOD, Dr D.O. Odebiyi. The following students were recognized; 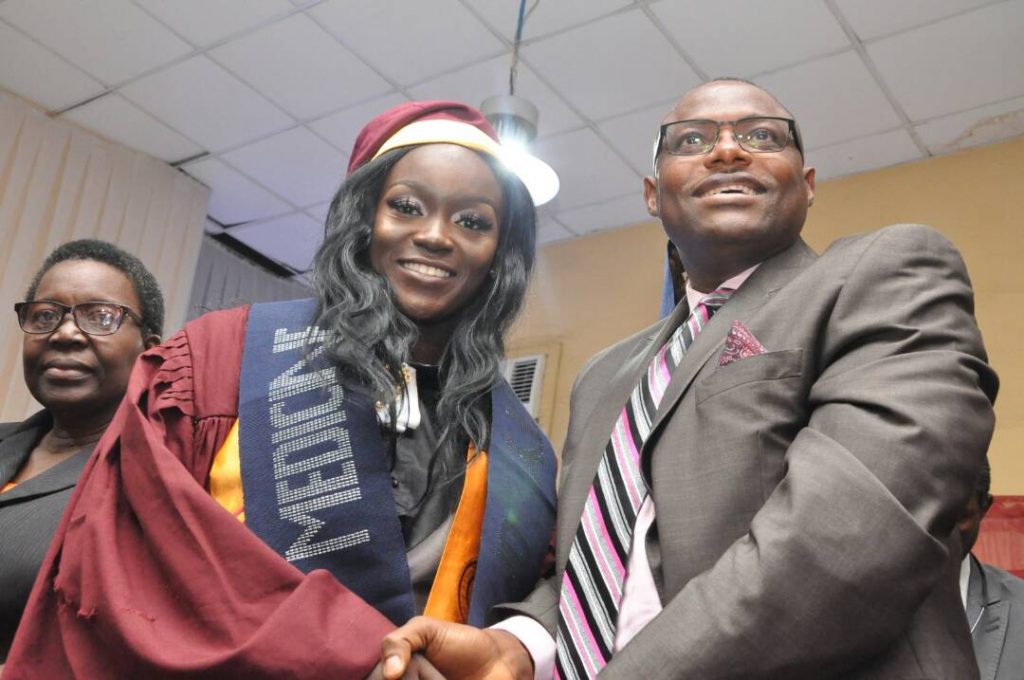 After the awards and recognition, past physiotherapy scholar students who graduated with distinctions were called on to award students that had 4.5CGPA and above with #100,000 and plaque. The students awarded with the cash price were Achigbue Precious Onyeka, Umemba Onyinyechukwu Chioma and  Jubreel Titilayo Adijat. Also there were awards of honor for special people, which included Dr P.A. Tella (first female acting HOD), Dr Yinka Akindayomi (CEO of Child Developmental Center) – where she told the inductees to change the world and Nigeria need people – and Mr O.C. Odunuga.

Following this, exposition on the class ’17 year book was done by the Editor-in-Chief, Adesina Oyindamola Islamiyat. The president of ULAPS – Miss Ogunusi Afolakemi – also gave her speech. the best student in research project, who also doubles as the class Rep. of the class 2017 – Adodo Rachel – was called to give her farewell message and she thanked the lecturers for making today glorious and her classmates should always be people of integrity and never forget their root.

Closing remark was done by the Provost, Prof F.E.A. LESI at 4:03 pm, also reminding the inductees, that they should be a light house, change the society than be a mirror to the society. He ended his closing remark with prayers. The National anthem was taken and closing procession at 16:07pm.