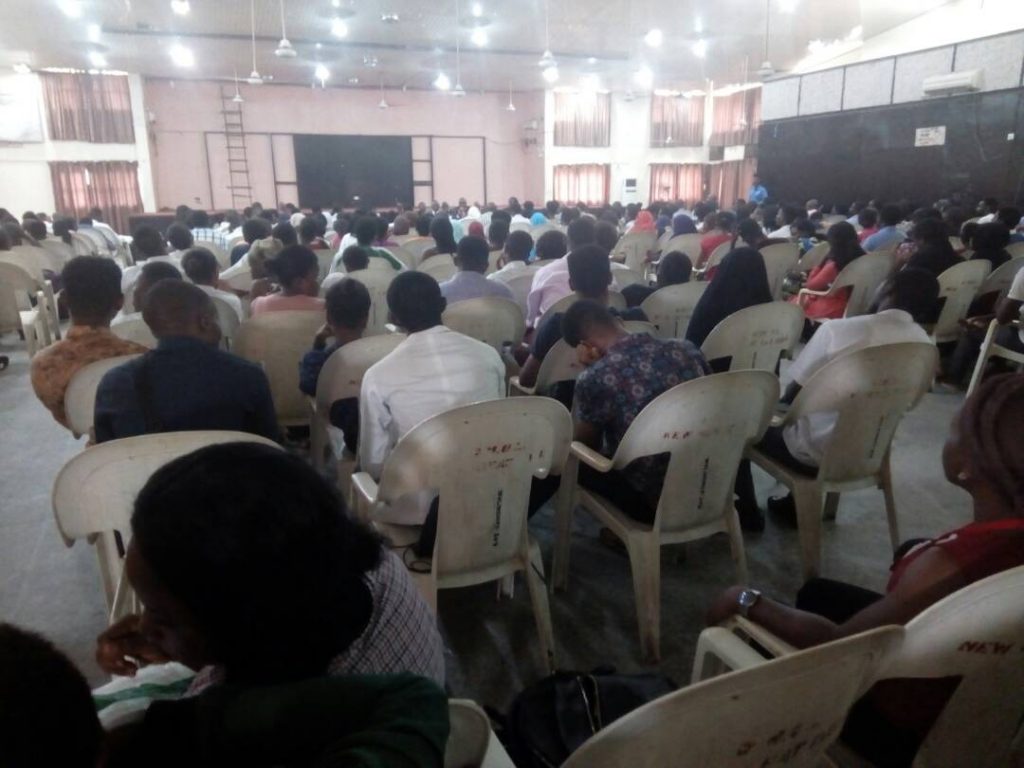 Following the first of its kind that was held on the 8th of November last year,  a notice was sent out round the college community sometime last week for the next meeting, scheduled for the 9th of February, 2018, between the provost, school management and the students . At the meeting, which was the first for the year, a lot of issues were discussed, and it was promised that the meeting would be a regular occurrence to pass across information and listen to dealing among students and the management.

The meeting started some minutes after 10am in the new great hall of the college of Medicine with the provost welcoming all and acknowledging all departments represented at the meeting and immediately, the purpose and issues of the meeting were being brought to light by the provost.

The first on the list was on “Student Politics”; he pointed out that management have observed that some students have forgotten why they are  in school and have gotten carried away with student leadership. Thereafter, making it clear that the “primary” reason for been in school is “to read, pass exams well and graduate well and on time”; student politics and every other thing is secondary. He also mentioned the notice of COMPSSA dissolution sent out by the management, and the current administration must hand over, the electoral committee have been Put in place to hasten the election process, advising/imploring the students to use this opportunity to vote in responsible people, follow the constitution and focus on the primary reason why they are here – in school.

The next issue that was sorted was on “the facilities”, considering that renovation and rehabilitations of toilets and some rooms are ongoing, funded by the Alumni. “OPH female hostel is the next place for renovation by an Alumni Set.  The responsibility on the part of the students is to look after the facilities well, “although there are facility managers, students shouldn’t behave like animlas”, said the Provost. He further explained that if a facility is damaged, the person who damaged should own up and takes responsibility and if not, the whole hostel section been serviced by that facility will bear the cost equally.

Then the golden challenge of Accommodation was the next on the list, of which the provost reminded students of the college’s policy of accommodating all 200level, all clinical students and all final year students (honoring the requests of roommates and room numbers by 600level students) but 300Level students are to ballot. This year the hostel accommodation process has followed a new pattern, largely because of NASU strike, and according to the provost, if you don’t pay all fees – including hostel (#33,500), school (#22,000) and #350 for ID card – you would not be allocated a room. However, the deadline for hostel payment and application was moved forward by 2 weeks.

The state of COMPSSA Cafeteria which has been a pain to all, was the next on the list. He also enlightened the students on the repairs on-going in the place to make it as conducive as possible, reasons for delays – raining season disrupted the repair of the roof – and stated that for the reconfiguration of the whole building to put it in its best state I.e. giving it a through and thorough ventilation, a committee has been set up headed by Prof Oladehinde and the COMPSSA President and General secretary are part and parcel of the committee and should make themselves available and highly active in the process.

The next on line was Power Supply. The provost hinted that the college is running on IPP but it’s expensive and challenging; some days ago there was the issue of gas leakage from the plant that it had to be turned off and our electricity consumption has gone up, the provost said. Then he went on to the breakdown of the income and expenditure on electricity; 15million naira is spent per month on NEPA and diesel (IPP cost 18 million naira) whereas Federal government only gives 7 million to the college for electricity per year. Now, the hostel accommodation is 33,500 naira per year per student which mostly goes into hostel management and is not enough to maintain electricity with it, “College of medicine cannot afford 24 hours power supply for anyone, so, should I give you the power college can afford? – By calculation that is about 2wks of 24hours power in a year or should you contribute for power? Meaning, pay for the power you want…” He added.

Furthermore, he explained the steps been taken to equalize power consumption and cost distribution by metering all the hostel building to know the exact amount of power been consumed by each block and spread the cost across all occupants equally, “any other additional cost incurred on electricity will be paid for, such as Air Conditioners in the COMPSSA cafeteria to make it conducive, as suggested by students – will be paid for either by students or COMPSSA. However, whatever is been generated from the COMPSSA building will all go back to COMPSSA, not a dime would be taken from the money to run any other affairs of the school, so if COMPSSA can afford it, why not”.

The final issue that was discussed was on the “cost of medical education” generally in Nigeria and especially in the college of Medicine. The provost went on to breakdown the extensive cost of every class in medical school and all practical and training involved, which is an average of $3,600 according to NUC to train a BSc or BA graduate “But that is not the case here, as we pay very little which is almost tantamount with suboptimal training and its becoming unrealistic to continue paying and training this way while expecting a different result”. The way forward proffered was to have a chat with our parents to let them know the state of things, also keeping in mind that we have to maintain standard, which we  can choose to self-fund as a lot of money is needed for optimal training and practical, which the government isn’t providing.

At this point, the meeting was coming to an end at about 10:45am – as the provost considered the students being away from lectures and other school activities – but the meeting would not be complete without students reactions and questions to all that has been said.

Questions, suggestions and reactions were allowed from the students. One of the questions by the students was on power alternative to solar energy, since NEPA/diesel electricity and IPP seems too expensive and the answer was, “Solar power is not a bad idea but the installation cost is quite high. Moving forward solar power can be a backup plan but certainly not this year”. Another question was on the breakdown of the hostel fee and all the charges included, his response – I have no figures in my head (because I like to work with facts and figures, so I don’t come tomorrow and change what I’ve said today), we are all here to brainstorm, get exact figures and work towards that with everyone.

One of the students also brought up the question on “if IPP is very expensive to maintain, why not go back to the old way of power supply – which is NEPA at any time and diesel generator for 5hours?” The reply was  “the entire LUTH has been completely cut off from NEPA supply, and unfortunately, it’s an all or none things, that is, we cannot return to NEPA for electricity supply because our power supply have been redistributed. However, if the cost gotten across hostels for consumption of electricity is not reasonable, then light would be rationed and we would have to come to a reasonable figure for all”, he further emphasis “I am a father too, and won’t want bad for my “so called” many children, the director of students affairs is your mother”.

Some other issues  raised were on student’s accommodation problems, NHIS (TISHIP) access, getting Transcripts and Statements of result which are subject to the ongoing NASU strike. However the provost made clear that the NASU strike is a strike for welfare and the university is not against anybody standing for their rights or exhibiting their right. Also the welfare of students, commendation of the ongoing renovation of the blocks common room was mention. GST has a compulsory course for all university of Lagos students to graduate and induct was reemphasized, including the fact that there are no make-up for the exams. Therefore, every student yet to pass the exam as a requirement were advised to attend the classes – which holds on Thursdays at the biochemistry lecture room between 4pm to 6pm weekly – and enroll for the exam.

Following the complaints and reaction of a student towards Drug abuse in the college environment – especially smoking weed in the wrong places – the provost reiterated the university’s rules on Drug use which is a Zero Tolerance to drug policy. Further, he stated that every new 200level incoming student will have a drug test and any student (old or new) held or involved in any infraction would be tested – test would reveal any form of drug use up to the last 3months – and if positive, sanctions put in place would be applied. However, the authority is aware of this addictive problem and treatment is free for students, also the counseling unit is available to help always regarding all situations or challenges. He also highlighted the harm of engaging in drug abuse and advised all students to stay away from drug abuse and addiction and also go around with their ID cards for identification always. It was also stated that the New Great Hall stage was no longer safe for use and would be fixed as soon as possible to avoid any casualties.

On a final note, the concluding answer to the power supply questions and objections from students by the provost was, “if you want more light, pay for it”. Prof. Abdul Kareem was then called upon to speak briefly on the accommodation process with every other issue concerning those directed to her, after which Prof Ogunlewe – the Director of Students Affairs – thanked the provost and members of the management for the dialogue on behalf of the students. On the management team also, were the Dean of clinical sciences, Dean of dental sciences, members of the directorate of Student affairs among others, the meeting is set to be a continuous interaction between the students and the school management as a feedback mechanism.