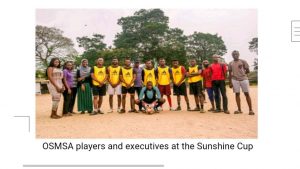 The match started at 1 o’clock and the sun was ever glorious…trust Ondo to live up to her name.

Day 1 marked an epic start for the games. From the KWAMSA – LASMSA 1 – 0 defeat to EKIMSA’s 1 – 0 victory against the hosts themselves to the almost goal-less match between OGUMSA and IMEDSA, it was an unending spirit-filled game. Dara, the striker (described by a teammate as ‘swift and skillful’) brought the men of KWAMSA their victory that day with the assistance of the team’s agile defender Al-ameen. Dara is said to have always troubled opponent’s defenses and always created chances for KWAMSA. OGUMSA won in a penalty shootout against IMEDSA and the victors were off to the semifinals.

It was a happy day for EKIMSA after Elijah, the second year pharmacy student brought them their victory against the hosts as he thrust the ball into the net to be caught by the keeper. All attempts to equalize were defeated by the valiant keeper of EKIMSA, Jamiu (the impenetrable wall). 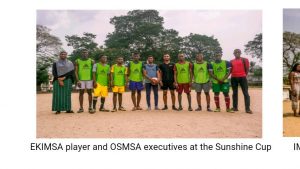 There was a lot of talk around campus about the victory of EKIMSA, Some even thought there was bad blood. But all that was irrelevant because the next match was going to decide EKIMSA fate in the competition. EKIMSA faced the men of OGUMSA ( warriors I would call them). The game was undeniably epic, a match many would pay good money to watch again. Sadly, there was no video coverage.

EKIMSA’s very own president, Mr. Ojo Roland graced the pitch with his boots and brought honour to his men with his sweat. In the midst of the tussle, he made sure he brought his men a goal. But OGUMSA was going for gold. There was Clanzee, and there was Pablo, then came Niyi and the last goal from Clanzee again. Those men did OGUMSA proud that evening.

OGUMSA emerged victorious and the game was entertaining from start to finish. Every one of OGUMSA’s four goals brought new expression to the audience.

After IMEDSA had qualified as best loser following the game against OGUMSA on day 1, they got to face the valorous men of KWAMSA thus, a chance for IMEDSA to redeem themselves .It was a great game and both teams put their all into it. But the pitch was in dynamic equilibrium, no one really having an advantage over the other team. IMEDSA must have a thing with penalty shootouts as the match was still at 0 – 0 by the end of the second half. It all came down to a penalty shootout. KWAMSA broke the balance with a final shot by Umar and emerged victorious with a 5 – 4 win. 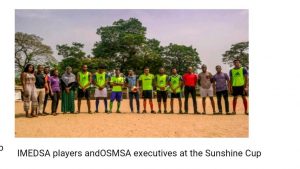 The final match started around 5 pm. Both teams were equally qualified to enter the finals and equally qualified to win the match. The match commenced as Amagu, the referee blew the starting whistle. Shots were fired and Ogun State made the first hit.  The match seemed to start shaky for KWAMSA especially for their defense, the way OGUMSA weaved through was almost like art. A defender from KWAMSA had this to say: “Clanzee (the OGUMSA striker) is a defender’s nightmare. But I believe we were able to hold him down in the finals.” And they did, even though KWAMSA was trailing they worked hard to turn the tables around which they did momentarily. The equalizer was a goal from Jamiu – simple and subtle. Jamiu is known for his meticulous placing that throws keepers off almost every time.

The highlight of the match was Lawii’s thunderbolt. Lawal ‘Lawii’ Abdulrahman brought the KWAMSITEs their second goal – an unstoppable speeding bullet. According to Jamal, the keeper from OGUMSA, “His goal was mind-blowing. It was so fast that we all thought it was going out. It looked like that. Until there was a deflection.” KWAMSA was in the lead for a good while, they thought it was over…they were so close to gold. But then, in the words of a KWAMSA player, “We were punished by a late deflection.” Apo, the maestro (as a teammate called him) fired the equalizing shot at the last minute. It was all screams from then on. Everyone knew what it was going to come down to in the end – the penalty shootout.

After pacing back and forth, the game finally ended with a 7 – 6 finish with OGUMSA taking the gold home. The final shot of the entire tournament was played by Niyi from OGUMSA. His shot sealed the victory of his team.

Standing on the S.O.N pitch, watching people go out through the narrow, rusty gate as the sun was downing before my eyes, I couldn’t help but notice the poetic beauty of how the Sun was setting on the Sunshine Cup.