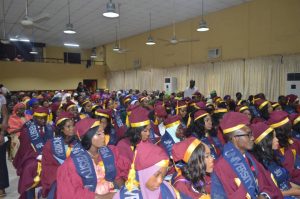 The College of Medicine, University of Lagos on Thursday held its first induction ceremony for graduates of the Department of Nursing Sciences.

The Department of Nursing Sciences which commenced academic activities about eight years ago witnessed the graduating set of 2014/2015, 2015/2016 and 2017/2018 session being inducted at the event.

Speaking at the occasion, the Coordinator of the Department, Dr Florence F. Folami expresses her joy while also appreciating all those who had contributed to make the day a reality “This is a joyful day for me, I feel honoured and elated to be part of the historic moment where we are inducting the first set of nurses in the College of Medicine, University of Lagos”.  She also explained that the induction could not be done in the past three years because the department was yet to meet its full accreditation, which has now been achieved.

Dignitaries at the event include; the Lagos State Head of Service, Mrs Folasade Adesoye, the Provost of the college of Medicine, Professor F.E.A Lesi, the guest speaker of the event, Dr Malvis A. Humphrey, the College Secretary – Barrister Oladejo Azeez, among others.

The event also features among other activities, prize giving to the best graduating students of the three sets, presentations of awards of excellence to notable personalities and induction into the College of Medicine Alumni Association.