While the waves of evening slowly faded into the night, at about 11:30pm on Wednesday, 23rd of May, 2018 – a fire alarm  sounded on the second floor of the block 4 girls hostel, in the College of Medicine of the University of Lagos, LUTH, Idi-Araba.
A resident of room 434, after cooking in the balcony left the frying pan with oil in it on the hot plate cooker, although she switched off the socket. The socket was said to be faulty and probably came on with the pan still on it, and a fire broke out. The net of the next room close to the balcony, went up in flames as residents of the hall attempted to put out the fire. Students,male and female trooped in to help quench the gradually growing fire. Then the porters came in with a fire extinguisher and put off the flames. The damage was minimal, no one was injured and the situations was put under control. 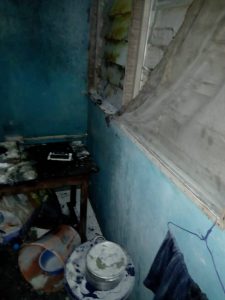 This is however the second fire incident in female hostel, CMUL this year and preventive measures should be put in place and precautions taken to curtail future occurrence. Occupants of the room burnt in OPH female hostel earlier this year have returned to a newly allocated room with the help of students donations organized by AMSUL (Association of Medical Students, University of Lagos), Redeemed Christian Fellowship (RCF) and the hostel management with no form of “relief donations or condolence visit” from the school management to the affected students for properties and “new-room-renovation investment” lost in the fire, which was not their fault. More should be done by the school management including the directorate of Students affairs for the welfare of its students.