On Monday, 23rd of July, 2018 – History was written as the first ever Pro Chancellor’s distinguished annual lecture was delivered in the famous J. F. Ade Ajayi hall – formerly called Main Auditorium – of the University of Lagos, Nigeria. Being the first of its kind ever in the history of the university and possibly the nation, a lot of efforts and details was put into organizing and putting together the event, which turned out to be a classic. 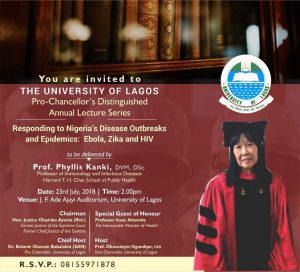 In an earlier chat with the UNILAG’s DVC (DS) – Prof. Ogunshola, who is in charge of organizing the program – she said, “… its part of the learning process and we want as much students as possible to participate in this annual lecture and more to come”. In attendance was the Pro Chancellor – Dr Bolanle Olawale Babalakin (SAN), the Honorable Minister of Health – Prof. Isaac Adewole, the guest speaker herself from the Harvard T. H. Chan School of Public Health – Prof Phyllis Kanki (DVM DSc) and many more distinguished fellows and special guest; it was truly a gathering of academia and the elites. In the insightful lecture titled -Responding to Nigeria’s Disease Outbreaks and Epidemics; Ebola Zika and HIV – various research works by the university including collaborations were highlighted, with activities and intervention done so far, also acknowledging Heros that have paid the price for us to learn and survive in the medical field and beyond, talk of the likes of the Late Dr. Mrs. Adadevoh.

After the lecture, the University’s Registrar – Dr Taiwo Ipaye – came up to give the vote of thanks, recognizing and appreciating several individuals, professors and groups present and represented at the lecture, also throwing in few humorous jokes to lighten up the atmosphere. Following which the university token of appreciation was presented to the guests on the podium; the DVC – DS presented the Pro chancellor, The host himself – in person of the Vice Chancellor, Prof Ogundipe – presented the Minister of health, who was the special guest of honor and finally, and the chief host of the event (the Pro chancellor) presented the guest lecturer. The chairman of the occasion was Hon. Justice Ayoola (Rtd).

Food and drinks was made available for Students at the Student Affairs Division (DSA) and there was a cocktail at the VCs Lodge later on for all and sundry.