Ogbeni Rauf Aregbesola, governor of Osun state arrived into the J.F Ade Ajayi Auditorium (formerly the Main Auditorium) 11:30a.m, one hour thirty minutes after the program was slated to start. He walked in with the Vice Chancellor of the University of Lagos, Professor Oluwatoyin Ogundipe . The program kicked off immediately with Dr Dele Ashiru of the department of Political Science, University of Lagos being the host . The opening prayer was taken by Dr. Margaret Lotto from the department of Economics, University of Lagos. The Public Lecture was a sequel to the public lecture held by the department of Economics held on the 1 8th July, 2018 at Afe-Babalola Hall. Introduction of guests was done, important personalities and dignitaries such as Emeritus Professor Ademola Oyejide, HOD Economics department (Professor Risikat Oladoyin Dauda) , Dean Faculty of Social Science (Professor Iyiola Oni), Professor Ben Okujafor (Deputy DVC), Honorable commissioner for Regional planning for Osun state (Honorable Bola Ilori), Former DVC (Professor Duro Oni) , Ambassador Wale Williams, Dean of Basic Science (Professor Bunmi Mapeola) from the University of Lagos as well as the entourage of  the Osun state government were present.

Remarks by the Head, Department of Economics; Professor R.S Dauda,  Dean, Faculty of Social Sciences;Professor Iyiola Oni, Welcome Address by the Vice Chancellor; Professor Oluwatoyin Ogundipe were taken. The keynote address was given by the chairman of the program, Emeritus Professor Ademola Oyejide . Citation of Ogbeni Rauf  Aregbesola was read by Dr Simon Akinleye.

The lecture was delivered by Ogbeni Rauf  Aregbesola  for about two hours who started with his state’s anthem, recognized the dignitaries present and mentioned that he was excited when he got the letter to come and lecture as he had been looking for such an opportunity. 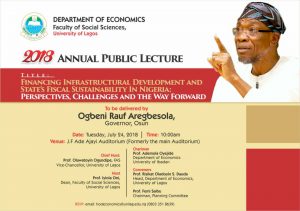 His paper was titled “Ringing Waters from Stones”. He talked about the rehabilitation of Osun state .His paper can be summarized as:

The government focused on Education, Health and Wealth creation which caused the need for national consciousness which would further cause integrity, honesty and creativity which is what the Omoluwabi consciousness was all about which was what he worked on when he became governor.

The governor talked about how he was able to create over 20,000 jobs within 100 days in Osun State. 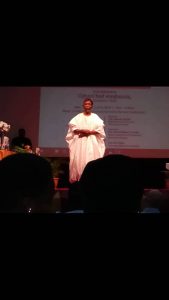 Agricultural practice in Osun state became a norm in the past 7 years. They partnered with crop producers, farmers so that food production would be within the state which would later in life grow to help the country desist from importation of food.

Productivity;the governor said that you should be paid what you work for,you shouldn’t be paid more than you work for. This would help build our nation better.

The governor also said if the Nigerian government took caution as much as women took care of their physical bodies, Nigeria would be a better place  10 years  from now.

The governor appraised himself of eradicating poverty, raising the standard of  living of people in his 8 years of governance. 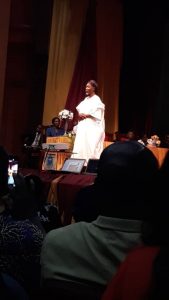 Ogbeni Rauf Aregbesola disclosed the reason he detested the idea of being called”His Excellency”. He said too much power was being given to people we put in  power to serve and he found that unnecessary. He said” His Excellency”title was not written anywhere in any constitution. The right way to address the Governor or President was”Mr  Governor or Mr President”.