The correspondents of The Press Club, UNILAG, OSONWA IRUOMA AND JUNAID SALAMAH finally met with the President of Pharmacology  Student Association after so much rescheduling, to have an up-close discussion of Association of Pharmacology Students, University of Lagos (APSUL). 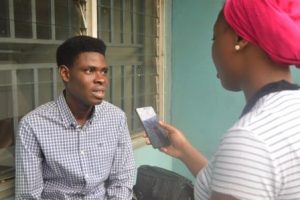 GOOD DAY SIR, CAN YOU PLEASE INTRODUCE YOURSELF AND YOUR DEPARTMENT?

I am OYERINDE ADEDAYO, president of APSUL, a 400l pharmacology student. Pharmacology department is one of the nine departments in College of Medicine, University of Lagos, having about 200 students. Pharmacology is a four (4) year program including the first year spent at main campus Akoka. APSUL as an association has 13 executives and majority of the current executives are females, (I can’t categorically say more at the moment).

WHAT WAS THE INSPIRATION BEHIND RUNNING FOR THE POST OF PRESIDENT?

First thing first, I had noticed as a 200l student that the way things were being run in the association was fairly good and needed improvement so I discussed with my classmates of this need. Seeing they already had knowledge of my leadership capacity from our diploma days as course rep, they believed in me and I thought to myself that I could try to run for the post of vice president which I did last year and won, and subsequently I saw that wow! I could make more impact and change the way things were being run and also increase our exposure in the school for instance we didn’t have a notice board, it was when I was VP I fought for us to have a notice board so with all these I decided to run for the post of president.

WHAT PREVIOUS POSTS HAVE YOU HELD OR WHAT SERVICES HAVE YOU RENDERED AS A STUDENT?

Okay I was the course rep for the diploma, the vice president of APSUL and now President.

WHAT IS YOUR PHILOSOPHY OF LIFE?

My philosophy of life is simple, if you work hard, success always comes anyhow so just try to work hard.

WHAT WERE YOUR EXPECTATIONS AND WHAT ARE YOUR ACHIEVEMENTS SINCE YOUR TENURE BEGAN?

First we never had any publication but I am very happy we have one right now called D.JOURNAL (meaning drug journal), we started an efficient tutoring and mentoring program which yielded great results because our 200l students passed very well in their exams, then we had a successful sports week and yes! We had a Fresher’s party.

WHAT ARE THE CHALLENGES YOU HAVE ENCOUNTERED SO FAR?

Okay, yeah! We have had lots of challenges, number 1, our number is very discouraging as we seem to further decrease yearly, and then also our financial strength is poor, dealing with the other executives and differences in opinion, it’s really hard to deal with people.

WHAT IS YOUR VISION FOR YOUR DEPARTMENT?

My vision for pharmacology students is

(i) Produce academically excellent individuals through effective tutorials and mentoring.

(iii) Boosting the confidence of students and informing them of their relevance in the health sector as change agent.

TELL US ABOUT YOUR RELATIONSHIP STATUS

Presently I am not into anything except pharmacology, my kind of person is “bookish”.

WHAT DO YOU DO FOR FUN?

My chilling is watching movies, going out with my guys, playing football (I am a goal-keeper).

HOW DO YOU JUGGLE BEING A STUDENT AND PLAYING YOUR ROLE AS PRESIDENT?

Actually it has been very difficult, at first I thought it was something I could easily do but then I realized it would always have an effect, so I adjusted my time table. I basically try to manage my time, delegate duties and also try to invite other APSULITES to help so I don’t overburden myself.

LOOKING BACK AT THE THINGS MENTIONED IN YOUR MANIFESTO, RATE YOUR ACCOMPLISHMENTS ON THE SCALE OF 1-10

I wrote my manifesto with very high hopes, but some things have been posing as setbacks. Most of the things I hope to accomplish are moved towards the end of the tenure. Out of 10, I’ll give myself 5.

WHAT MORE SHOULD YOUR DEPARTMENT WATCH OUT FOR BEFORE YOUR TENURE IS OVER?

I plan on organizing an extensive tutorial for the most tasking course which produces a high failure that is pharm 306 to ensure good success this time around. Our new publication would also be out before the end of the year. Also, there would be a Halloween night and a national conference.

ANY COLLABORATION WITH ANY OTHER DEPARTMENT/FACULTY/SCHOOLS/SCHOOL MANAGEMENTS?

The national conference involves DELSU, OOU, ABUAD, BABCOCK and some schools in Ghana.

There would be a cinema rave with Medical Lab Science department.

WHAT IS YOUR TAKE ABOUT THE MANAGEMENT, THE NEW RULES IN THE SYSTEM AND HOW IT AFFECTS THE STUDENTS?

Ok. Number 1, I dislike the way the students are treated by the management. I believe the students should be the priority of the management. Secondly, access to the school bus has been withdrawn hence a lot of activities are being hampered. Also, there is minimal accommodation for delegates.

IS IT THE SCHOOL THAT MADE SUCH RULE CONCERNING ACCOMODATION?

No, but I don’t think there is any provision for that. They seem to make their rules before becoming lenient. The current state of COMPSSA (College Of Medicine And Pharmaceutical Science Student Association) is no longer as it was. Typically, students should directly relay information to the COMPSSA executives but now, the information has to get to the DSA first which discourages direct conversations between students and the vendors.

WILL YOU WANT TO VENTURE INTO POLITICS OUTSIDE SCHOOL?

Ideally yes, but with the state of our country, no! For instance, before going into school politics, my parents had the notion that it involved cultism since it was that way when they were in school and it is the way it is run in the outside world but here in LUTH, the environment accommodates both the calm and outspoken persons- in fact, anybody once you can relate with people.

IF GIVEN THE OPPORTUNITY, WHAT WOULD YOU LIKE TO CHANGE ABOUT LEADERSHIP IN NIGERIA

Number 1, let the youths take charge. Then, politics should not be monetized but more of service. In doing so, their salaries should be cut down as it is too much.

SO THAT’S BASICALLY ALL YOU WOULD DO?

TELL US SOMETHING PEOPLE DON’T KNOW ABOUT YOU

People think I am bookworm but I’m not. I play a lot and I am also a very funny person but I don’t seem so outside.

ON A LAST NOTE, WHAT IS YOUR MESSAGE FOR ASPIRING STUDENTS LEADERS?

Let me use myself as an example. Before becoming an executive, I could not initiate conversations as I was shy but now I can. You can achieve anything, so far as you are diplomatic. Also, don’t let the executive position distract you from your main goal in school as a student.