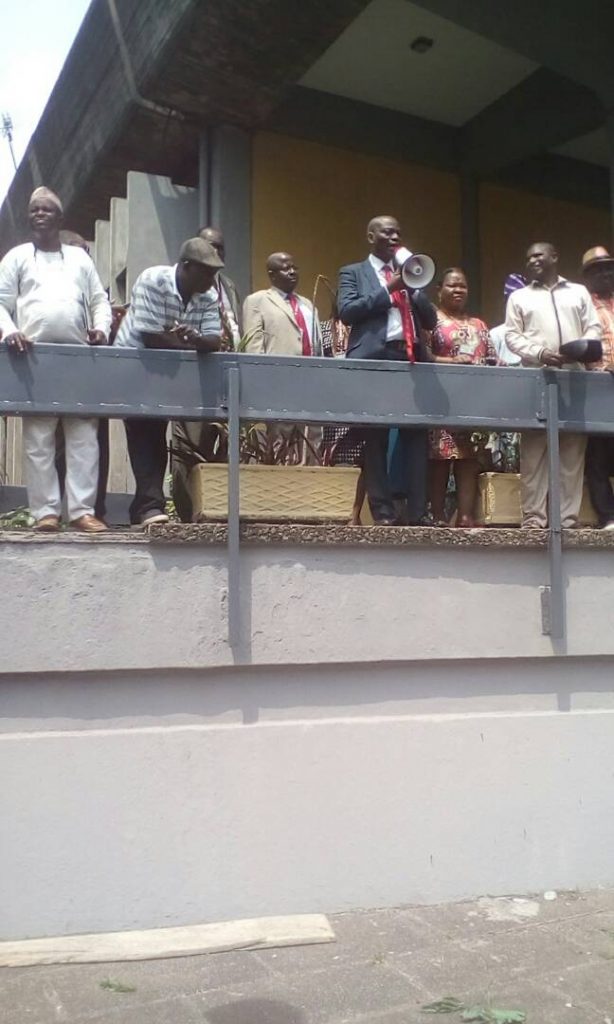 Chants of solidarity filled the air as members of the Non-Academic Staff Union of Universities (NASU), Senior Staff Association of Nigeria  Union  (SSANU) and National  Association  of Academic  Technologists (NAAT), University of Lagos, (UNILAG) Chapter clamoured for  the release of two of their union leaders, Prince Adefolalu and Adekola Adetomiwa. The non-academic staff members took to the varsity’s road to air their grievances while students were trooping out of Jelili Omotosho Hall after the end of the 2017 Matriculation Ceremony.

The ceremony marked the fifth day  activity for the varsity’s Orientation and Matriculation Ceremony Programme organized for Fresh UTME and Direct Entry Students. The matriculation ceremony which started earlier than expected had the hall of 5,000 filled to capacity. Speaking during the peaceful demonstration, Chairman of NASU,  UNILAG chapter – Mr. Kehinde Ajibade -described the arrest of the union leaders as “sudden and illegal”.

He said, “Around 2am yesterday (Thursday) morning, two of our union leaders, Comrade Prince Adefolalu and Comrade Adekola Adetomiwa, were picked up in their house alongside  members of federal SARS. Over sixty security operatives  surrounded  the house of Prince Adefolalu around 12am in the midnight fully armed and he was whisked away from his  house in the middle of the night to Ikeja Special Investigation Bureau (SIB)… in the same vein, Comrade Adetomiwa Adekola also was arrested around 2am in his residence at Iwaya”. Ajibade explained that the local chapter unions’ effort  to secure the release of the arrested leaders were abortive. He stated that the police could not peg any offence on the arrested leaders. 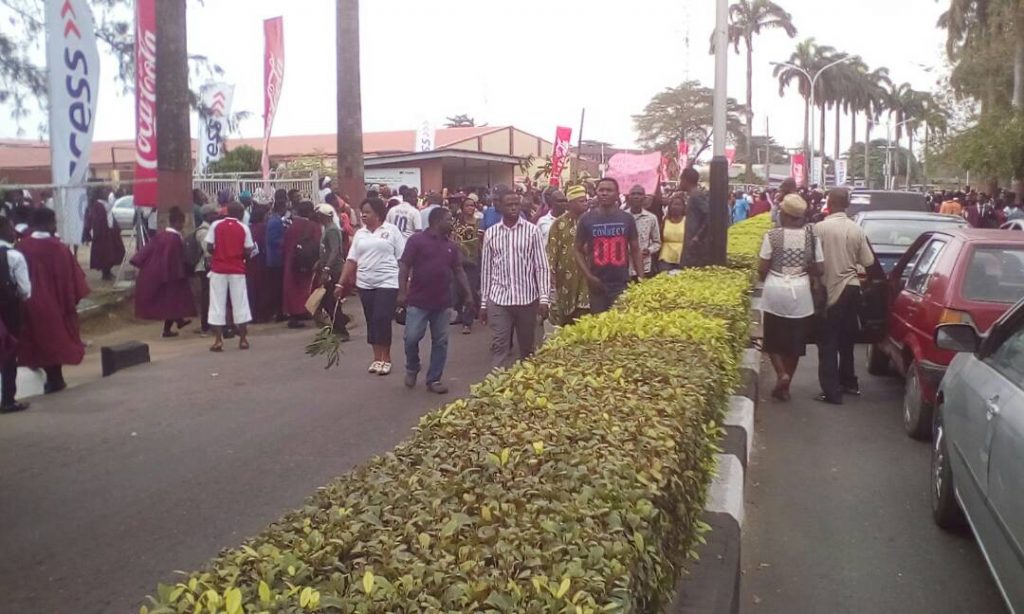 “We went to Ikeja yesterday, all the three unions: myself, the NASU chairman, the chairman of SSANU, and the chairman  of NAAT, University of Lagos branches, to the Commissioner of Police office, and asked for their  offences”, Ajibade said. He added, “The head of the SIB unit could not establish any offence against them. The only thing  he said was that the order is from above… We went there with two of our lawyers but the Commissioner of Police was away. We waited for about 5 hours. Even Femi Falana (SAN), we called him too. He joined  us there, and he made them realise that the arrest was illegal, and it’s an act of criminality and illegality for them to bombard a union leader house around 12am in the midnight”.

The UNILAG NASU boss also revealed  that further efforts at a latter time to ensure  the release of both comrades proved futile. “Around 8pm yesterday, we put up a call to the head of the SIB to ask what was  happening. He said they have been transferred to DSS office at Shangisa”, so he said. Meanwhile, UNILAG Vice Chancellor,  Prof.  Oluwatoyin Ogundipe has denied connection with the arrest. Prof. Ogundipe made the disavowal in front of the varsity’s Senate Chambers while addressing the union members.

The 12th vice chancellor pleaded with the striking union members to keep calm. He also promised to ensure that the issue will be sorted out. He said,  “I want to say this, that concerning your leaders,  we have been interacting with your  leaders. And if you have been listening  to news, I have put my office at stake being the only vice chancellor in Nigeria that have been supporting this strike. So I want  to plead  with you, right now as I’m leaving  here (UNILAG), I am going to Shangisa to see the union leaders so they can know that I have no hand in it”. As of the time of filing this report, the Vice Chancellor and leaders of the striking unions have left for Shangisa.

Meanwhile, members  of the striking unions, under the Joint Action Comittee (JAC), have continued to ensure total black out across the varsity. Students are paying the heaviest costs as halls of residence and lecture rooms have become uncomfortable due to poor ventilation.