Around 9am on Wednesday, 28th of February, 2018 when ladies were rushing out of their rooms to get to classes on time, some still arranging their rooms as a result of the hostel movement that took place on the 24th of February 2018 and some still sleeping, there were screams of fire in the hostel.
The fire occured on the ground floor B wing, room 11b on the left side of the female hostel OPH, whose new occupants just moved in 3 days ago and had left for class before the incident took place.
Before leaving for class that morning the new occupants said they noticed sparks of light from a socket and they switched off the whole sockets in the room immediately and left for class afterwards.

The fire was put out by the efforts of female students who poured water through the torn window net and had jacked the door because no fire extinguisher was available at that side of the hostel at the moment. The fire was put out before some college officials were called on to see the incident such as DSA, college electrician, chief security officer etc. 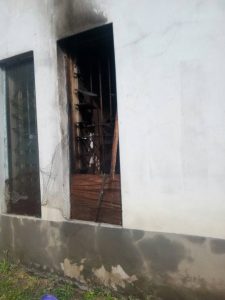 The college electrician while examining the room the fire took place, discovered that the fire began from the rear end of the room at the window side where naked wires were passed under the bunk with a bed on it which sparked, ignited and affected the bed. Fortunately no one was on the bed at the time the fire started.
The occupants lost some personal belongings such as clothes, books, mattresses, tablet and documents 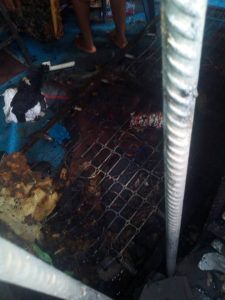 When the occupants were been questioned if any electrical work was done in the room yet they replied in the negative except on Tuesday night when they fixed the new fan bought by the hostel electrician.

Apart from this, students said the electrical connection in OPH is really bad because some rooms experience shocks while some have electrical issues
The supervisor of the hostel felt the hostel electricians ( name withheld) were enough to do the electrical work but they can’t attend to everyone at the same time.However, since some students can’t stay in dark rooms and wanted to fix electricity in  their rooms in time they engage the services of the makeshift electricians.

From the report gathered today nothing has been done yet and we are talking about lives and property here and we hope school management look into this in time to save lives and get things back on time.