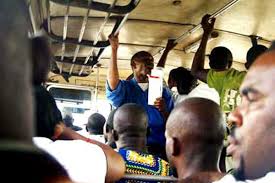 “If your menses comes with disturbing pain, stops abruptly or it’s irregular, just chew a tablet of this drug (trade name hidden) with lime, you’ll think it’s a miracle!…”, he preached. For those who don’t know what Ciprofloxacin is; Cipro – as its fondly called by people – is an antibiotic belonging to a group of drugs called “fluoroquinolones”. This antibiotic treats only bacterial infections by killing them. It will not work for viral infections such as common cold, flu etc. However, the unnecessary use or overuse of any antibiotic can lead to its decreased effectiveness.

Recently, while coming from a friend’s function, I took a public TATA bus from Ketu heading to Ikorodu at about 9:25pm. Anyone taking this bus around this time knows we were been chocked to death – with not less than 80 passengers in the bus. It was during this period that I encounted the man selling the drugs in the bus. He talked about eating healthy for more than 10 minutes and I believed the goal was to sell herbal medicine or to enjoin passengers to feed on good and nutritious food like Amala and Ugwu instead of Shawarma and other fast-foods.

He then brought out the drug and ranted about its importance, mentioned that it cures “all” types of infection. He even scared the life out of commuters with endless list of microbes and the usual “Staphylococcus Aureus” known to all _gbogbonise_ sellers, infact he actually called it _gbogbo nise_. I was perplexed and started wondering what drug it could be? He decided to share it and asked people to look at it with pictures that shows that it treats GI infections, UTIs, skin infections e.t.c. I fought to get one and looking at it I marveled, “this is Ciprofloxacin na”, oh yeah, it has a NAFDAC number – if this is a real number, I have no idea – and he boasted about that. He also mentioned only pregnant women shouldn’t use it.

I told people around me not to buy it and gave little advice but I was at the tail end of the bus. He observed only few people have bought it from the back, so he decided to bring the market there and started sharing the “blessings”, he mentioned how cheap he’s selling it compared to other pharmaceutical shops outside. I started smiling and shaking my head at his rant, then he started using me as an example. He said, “A young boy like this would soon start looking old because all he knows is Shawarma and smiling like an illiterate instead of him to buy what would make him shine and look as young as I am.”

I called him closer to my side and told him, “hope you know you’re killing people with this drug!” He flared up, cursed my mother and all sorts. I think I ignited a flame already and decided to follow through.

I started with an introduction which made everyone concentrate, I love this part, lol. “Please I’ll like to say a little about this drug you’ve purchased. I am a Nursing Science Student from the College of Medicine, University of Lagos and I’ve been studying this course for 5 years, not an auxiliary. I took a course on Pharmacology – study of drugs for a whole year”. The people in front quickly tuned in and promptly looked towards me. I continued, “I am not here to spoil his market but I’ll just enlighten you so you don’t kill yourselves.” I explained antibiotics tolerance and made them know it was among the major highlight of last year awareness among health personnel. I explained briefly how they could come up with hepatitis out of it and also stated why they should consult their doctor or pharmacist before taking any drug. I summarized my ‘speech’ in 8 minutes and sat down for the rest of the journey.

The man boiled! He lapsed into a lecture about how he has been selling for close to 38 years (how many lives have been lost over these years?!) and how he studied pharmacology in the university and bragged about bringing out his ID Card, we saw nothing. I know I spoilt business for him that day but this is not the goal, many are actually suffering in this country and look for the best way to make ends meet. This is a call to action for the health workers in Nigeria, we just share our information without it reaching the nook and cranny of the nation. The few who are able to read our articles don’t even buy the drugs from Tata buses, they go to the pharmacy store. We need to make everyone know about our important publications that concern them.

I was in one bus recently where a woman marketed an antihistamine and said it would make your skin glow, all the guys in the bus started buying it, she said it’ll make them swell and look real fresh. They would also be very active in bed. Really?! There is so much ignorance out there and we need to make this information known and go out there through all means possible including inter-sectorial approach, collaborative actions with credible partnership with media outlets and other necessary platforms. The Universal Health Coverage can never be achieved if we keep our information behind bars.

Facebook Twitter Google+ LinkedIn more
Pinterest Tumblr Email
Previous ArticleAFTER ABOUT TWO DECADES OF STABLE DEMOCRATIC RULE, CAN NIGERIA BE SAID TO BE DEMOCRATIC? By Treasure Okure & Adewale Onagbesan.
Next Article At least 40% of students should control and manage their own businesses – VC UNILAG by Aishat Adebiyi